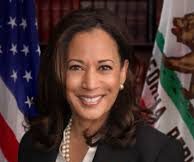 Her mother gave her a guiding principle: “You may be the first to do many things, but make sure you’re not the last.”

We’re partying now, but will we show her the kind of love that means active support later? (learn more)